LOST BALL AND OUT OF BOUNDS

Golfers lose balls and hit them out of bounds all the time, so it is important to know what to do when this happens.
If your ball is lost or out of bounds you must return to where you last played from and play again from there – called stroke and distance (Rule 27-1). [Make sure you  look at all the 'Frequently Asked Questions' at the very bottom of this page]

WHAT IS "OUT OF BOUNDS"?
Out of bounds [commonly referred to as "OB"] is defined as “beyond the boundaries of the course or any part of the course so marked.” This boundary is marked by white stakes (and lines connecting them) that are considered “fixed,” which means players are not allowed to move them. A player can stand out of bounds to hit a ball that is still in bounds, but cannot move the stake if it is in the way. A ball is OB only if the entire ball is OB.

"STROKE AND DISTANCE"
The penalty for OB is commonly called “stroke and distance.” This means that a one-stroke penalty is added to the score, and the ball must then be dropped as nearly as possible to the spot from which the original shot was played. In effect, this is a two-stroke penalty, since the player has gained no distance from the original shot; it is as if the original shot had never been played at all. Because of this, repeated OB shots can add several shots to a player’s score quickly.

EXAMPLE FROM THE TEE
If a player hits his original ball (first shot) and finds that it has gone OB, he picks up the ball and takes a one-shot penalty (second shot), walks back to the tee, and hits a new tee ball (third shot). Alternatively, if he believes the first ball is OB, he is allowed to hit a provisional ball. If it was indeed OB, the provisional ball becomes his third shot, and he plays his fourth shot from where it landed. In either case, if he finds that the original ball is in bounds, he plays his second shot from there.

EXAMPLE FROM THE FAIRWAY
If the player plays his second shot from the fairway and it goes OB, he adds his one-shot penalty (third shot), drops a ball as close to his second-shot divot as possible, and that becomes his fourth shot. Or, if he is uncertain whether the second shot is in bounds, he may play a provisional ball; if the second shot was OB, his provisional becomes his fourth shot and he plays his fifth shot from where it lies. Either way, if he finds that the original shot remained in bounds, he will play his third shot with that ball. 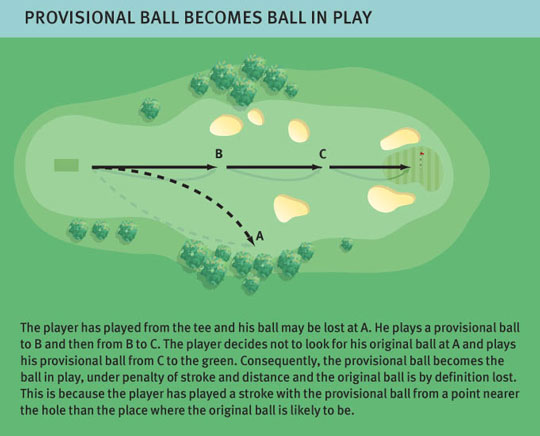 What do I play if I hit the ball into the water or a hazard?
Water hazards have their own rules YOU CAN SEE THESE BY CLICKING HERE
But in short, if you were to be allowed to play a provisional that had gone in a hazard you would be denying yourself a better advantage as you are entitled to take drops nearer the position where the ball went into the hazard or by using "drop zones".